Over the weekend I caught up on some reading.

I pulled Outwitting The Devil by Napoleon Hill from
the sea of books overflowing my bookcase.

If you don’t know who Napoleon Hill is, look up
Think And Grow Rich…

The bestselling success book of all time.

(I highly recommend you read it and if you have
already, then reread it.)

Hill wrote Outwitting The Devil right after he
published Think and Grow Rich in 1937, but
it was only released a few years ago.

The controversial nature of the book… 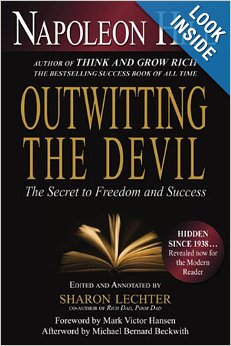 mi of criticism it would bring down  on him.

Inside the book Hill interviews the actual Devil
getting him to reveal all his secrets… how he
infects his victims and leads them to live a life
of failure.

Hill learns that “His Majesty”, the name by which
the Devil demands to be addressed, controls 98%  of the population through his tricks and deceit…

And the way he is able to get inside our minds
is because most people “drift” through life.

Another way of saying it would be…

Most people do not think for themselves…

Which provides a gateway for “His Majesty” to plant
the seeds of fear into people’s minds and lead them
astray to a life filled of failures and regrets.

During the interview, Hill also discovers how not to  succumb to “His Majesty.”

One of the main ways to outwit the devil is
to have a definiteness of purpose (intention, goals)
and to be in touch with your “other self”… your  unconscious mind…

Slamming shut the door that allows the devil in and
becoming part of the 2% that are out of reach of
his control.

Let me ask you…

What is your definiteness of purpose?

When you wake up in the morning, get out of bed,do you have a plan…a goal in mind?

How will you achieve that goal and get others to say  YES to you?

P.S. Inside the Keys To Yes you are going to discover
the secrets to the “other self” and how to get YESes from
not only the 98% of people who do not think for
themselves…but the other 2 % as well…

Allowing you achieve what ever definiteness of purpose  you set for yourself!