Trick Evolution into helping you get YESes in 2016

Want to know why it’s Guaranteed to work…

…and mold once resistance people into putty in your hands.

I’m going to spare you the 1000’s of scientific studies that have
confirmed all the benefits of this technology.

Instead, I will keep it as simple as possible.

So here is the gist of it…

It comes preloaded with it’s operating system. It serves as the major backbone for
all programs that you upload onto the machine.

Every so often, you might receive an update or two to fix some minor bugs – but the core of what runs the computer remains the same.

It would be very inefficient if every day that core change. Wouldn’t it?

In that case, all the different programs we added would also need to be updated to keep things running smoothly.

Well, humans are not much different.

Our operating system (our values, emotions and beliefs) are mostly coded into our brains between the ages of 2 and 6.

And for this to happen…

Our brain is run by a totally different operating system then when we have as adults.

During the ages of 2 – 6, our brain waves (our operating system) are in the Theta state…

…what I like to call the accelerated learning state or the imprinting state.

It’s here that the tracks are being laid down for who will become as we grow – which makes 100% sense when you think about our evolution (we’ll get to that in another email).

As we get older, another major shift happens…

…our daily operating system changes to the Beta state.

For the rest of our lives, we stop absorbing information like a sponge. Instead, we start filtering information through our pre-formed operating system that was coded during our Theta years.

This worked great for us when daily life was pretty much the same day in and day out, but not so helpful now in the information age…

…where we are being bombarded with new ideas on a daily basis.

The simple fact is…

As adults our brain is not set to the proper brain wave state to easily update its operating system.

(And the main reason why so many other programs fail to deliver results when it comes to changing your behavior.)

However, the AMAZING news is…

… in just a few short minutes, trick your brain from operating in the Beta state to the Theta state where imprinting behaviors you wish to acquire is natural…as it once was when you were a child. 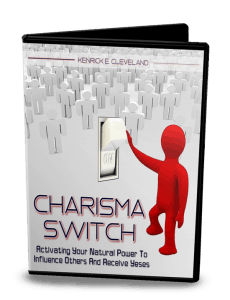 It’s this scientifically proven technology (among many others) that makes up the Charisma Switch.

And why inside the program, I’m able to you you with updates for your coding that switch on the three behaviors that makeup Charisma through my Neuro-Imprinting Sessions™.

I’m over simplifying the power of the Neuro-Imprinting Sessions™ (aka learning sessions), but I hope you now have a better idea on why they are GUARANTEED to work for you.

Let me tell you…

Especially one so powerful that guarantees huge results in under 30 days and all for one small payment for under $30.